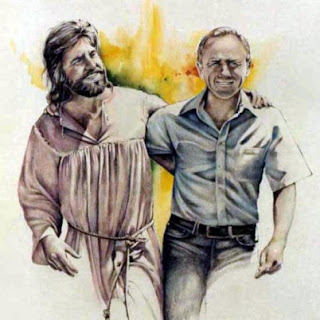 In his book, "Walking with God", author John Eldridge writes about how a Christian can have a real and intimate walk with God. John shares how we can hear God's voice and understand His guidance in our lives. Eldridge's book is his one year spiritual journal. John writes everything from how he and his family missed God's timing when going on a trip, how he brings his feelings of emptiness to God and asks for His discernment, to asking the Lord if they should get a puppy. I was delighted to read how he understood God's will and his presence.

One of the stories of the resurrection in the Gospel of Luke tells us of two disciples on the road to the town of Emmaus :

They were talking with each other about everything that had happened. As they talked and discussed these things with each other, Jesus himself came up and walked along with them;but they were kept from recognizing him. -Luke 24:14-16

These disciples were discussing everything that had happened with Jesus and He comes along side of them and they don't know it was him. Something veiled Jesus' identity. It was only after they had gotten into town and asked Jesus to have dinner with them that they realized it was him.

When he was at the table with them, he took bread, gave thanks, broke it and began to give it to them. Then their eyes were opened and they recognized him, and he disappeared from their sight. They asked each other, "Were not our hearts burning within us while he talked with us on the road and opened the Scriptures to us?"-Luke 24:30-32

They realized that their hearts burned with in them, when Jesus spoke to them. Although they did not recognize that God was among them. God was there and His presence caused something to stir inside of them. Many times when God speaks to us something burns within us, we feel an impression, something within us. It's His Spirit.

The Scriptures teach us to listen to God’s voice:

He wakens me morning by morning,
wakens my ear to listen like one being taught -Isaiah 50:4.

Here I am! I stand at the door and knock. If anyone hears
my voice and opens the door, I will come in and eat with him,
and he with me -Revelation 3:20

It's God's desire that we learn to recognize His stirring, burning in our hearts when we hear His voice. Imagine if we could hear His voice more, if we could be more aware of His presence? How would our life change as the simple choices and major decisions are informed by Jesus?

For the next couple of months @PSCT we'll be considering how we can hear God's voice more in our Spring Life Groups. Join us!